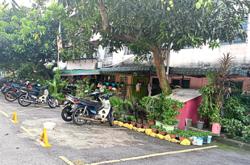 GEORGE TOWN: Perched on a hill and facing the Penang channel, Udini House in Jalan Tunku Kudin, Gelugor, has been unoccupied since the 1960s.

It is believed to be one of the oldest abandoned houses in Penang, if not the country.

The mansion boasts of a colourful past – its foundation stone was laid in August 1882 by then Lieutenant-Governor of Penang, JF McNair.

The mansion had stables for horses, an aviary, a deer park and a tunnel linked right up to the beach.

PHT’s records show that from 1930 to 1941, the mansion was rented to law firm Presgrave and Mathews, and during the Japanese Occupation, the Japanese navy used it as its Penang headquarters.

After the war, it was used briefly by the British Military Administration, then by the Royal Australian Air Force.

In 1953, the property was acquired for public housing development but the plan fell through.

The marine police eventually took over the property, but the house gradually fell into disrepair and remains so till today.

Historian Khoo Salma Nasution said the surrounding properties in the area were developed only after 2000, but nothing was done to the dilapidated Udini House.

A property consultant said Udini House was still zoned as an institution and not commercial property.

“As such, even at the present rate of RM250 per sq ft, the 1.2ha property is valued at more than RM30mil. The price could be double if it is rezoned for commercial use,” the consultant said.