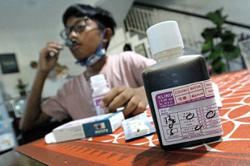 PUTRAJAYA: The Education Ministry is giving priority to opening new schools in densely populated places like Klang, Selangor and Johor.

Education Minister Datuk Dr Radzi Jidin (pic) said the ministry was looking for suitable locations in these areas to build schools as it face difficulties in getting land for such projects.

"Klang, for example, is among the most densely populated areas, and some schools with an enrolment of 4,000 people have to conduct two sessions, morning and afternoon.

"Various efforts have been made to set up new schools in these places but in areas with a high population density, the main constraint is the lack of suitable land,” he said.

He was speaking to reporters after performing the ground-breaking ceremony for a project to build an additional block and field for SK Putrajaya Presint 18(2) and opening the 10th general meeting of its Parent-Teacher Association here Saturday (June 25).

According to the Senior Minister, an average of 10 new schools were built each year.

On another matter, Radzi said the ministry would look into complaints that the primary school curriculum is too tough, making it difficult for students to master certain subjects.

"In this context, during the review later, we will see whether the issue is really about the curriculum being too complex or a case of lack of familiarity,” he said.

Asked on the influenza-like illness (ILI) cluster involving a secondary boarding school in Selangor, Radzi said the ministry would hold further discussions with the Health Ministry tomorrow to ensure it is safe for students to attend this school.

On the new block and field for SK Putrajaya Presint 18(2), he said the RM14.5 million project is expected to be completed in May 2024. - Bernama