PETALING JAYA: The Sessions Court here was told that the charge of cultivating 17 cannabis plants against nasyid singer and composer Muhammad Yasin Sulaiman will be maintained, in accordance with Section 6B (1) (a) of the Dangerous Drugs Act 1952.

Deputy Public Prosecutor Mohd Asnawi Abu Hanipah said this followed the chemical report obtained by the prosecution on Tuesday (June 21), which confirmed that the plants were indeed cannabis.

"As such, we would like to request a new date for remention to enable submission of necessary documents to the defence team,” he said at case mention proceedings before Sessions Court Judge Jamaludin Mat on Wednesday (June 22).

The court then fixed July 6 for remention.

Muhammad Yasin, 47, was charged with cultivating 17 cannabis plants in plastic pots at his residence at Casa Indah Condominium in Kota Damansara here at 5.30pm last March 24.

The charge, framed under Section 6B (1)(a) of the Dangerous Drugs Act 1952, provides life imprisonment and whipping of not less than six strokes of the rotan, upon conviction.

Meanwhile, Magistrate Zhafran Rahim Hamzah also fixed July 6 for mention of the charge of trafficking 214 grammes of cannabis faced by the singer.

The charge, framed under Section 39B (1) (a) of the Dangerous Drugs Act 1952 and punishable under Section 39B (2) of the same act, provides the death penalty or life imprisonment, and if not sentenced to death, is punishable by whipping of not less than 15 strokes, upon conviction. - Bernama 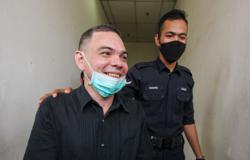