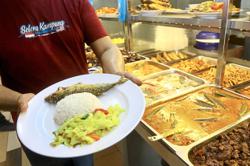 Bear with us: A banner at Kanna Curry House in Petaling Jaya asking customers to be patient since they are short of staff. — GLENN GUAN/The Star

PETALING JAYA: Battered by a shortage of workers, desperate restaurant owners are turning to robot waiters or even offering Malaysians expensive iPhones if they stay in the job for six months.

Some 1,500 restaurants around the country have been forced to pull their shutters down.

Food and beverage business owners said that to cope with the severe labour crunch, it also had to reduce operating hours and cut menu items.

To make things worse, F&B workers are being lured with better offers to work in other sectors, like the plantation industry.

The shortage was largely caused by the exodus of a large number of foreign workers at the start of the pandemic.

They have not been able to come back as the government had banned the entry of new foreign workers.

While the hiring of migrant workers was re-approved recently, the process is slow, said the Malaysian Indian Muslim Restaurant Owners Association (Presma).

Its president, Datuk Jawahar Ali Taib Khan, said the association has been unable to plug the staff shortage with local workers, while poaching of workers is rampant.

“Some desperate employers even hire agents to help them poach workers from restaurants.

“The government has announced that employers should not retain workers’ passports, so it is easy for the workers to walk away.

“Employers who have paid the levy, insurance and Social Security Organisation (Socso) contributions can only watch helplessly,” Jawahar said.

On Sunday, Human Resources Minister Datuk Seri M. Saravanan said an identity card by sector will be introduced to address the problem of foreign workers switching to other sectors arbitrarily.

This will still not stop intra-sector poaching, said Jawahar.

Instead, Jawahar said Presma and the Malaysian Indian Restaurant Owners Association (Primas) have suggested several times that the i-Kad be reintroduced.

ALSO READ : Restaurants on the verge of closing their doors

The passports can then be retained by employers, he added.

The Immigration Department had previously introduced the i-Kad, which could be used by foreign workers as an identification document.

Jawahar said around 1,500 restaurants have closed shop and many others have shortened their operating hours.

Restaurant owners who can afford to fork out money are using delivery robots but these cost around RM60,000 each, he said.

Others are promising extra perks and attendance incentives, he added.

“Even if you give them the stars and the moon, I don’t think locals will last long – they might use our restaurant as a training ground and later jump to Singapore for a better exchange rate,” said Jawahar.

Banana leaf restaurant Kanna Curry House is offering free iPhone SEs to Malaysians willing to work as waiters at any of its branches for a minimum of six months, as well as a RM10 hourly wage and eight-hour workdays.

Its operational manager, Yoga Kannan, said the offer is aimed at encouraging Malaysians to work and stay on in the industry.

“Besides offering iPhones, we are also offering 9am to 5pm working hours.

“So far, five workers have redeemed their iPhones,” he added.

Many have reduced their hours as their workers are too tired while some even close for two days a week due to complaints from overworked staff.

Restaurants were also increasing workers’ salaries due to their additional workload, he added.

Wong said the poaching of workers by other industries was also a concern.

Street food paradise may be lost

Restaurants on the verge of closing their doors