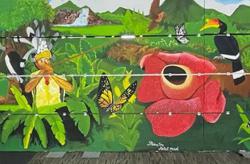 A section of the Sarawak-themed mural maze painting.

KUCHING: A Sarawak-themed mural painting measuring 1,387sq m in size has made it into the Malaysia Book of Records as the largest of its kind.

The artwork portrays Sarawak's rich culture, adventure, nature, food and festivals on a 181m maze-shaped structure and was created as a community fundraising initiative in aid of the Sarawak Society for the Deaf.

The organiser, Absolute Cool Event, also aimed to raise awareness of the society's work and the role of art in an inclusive society.

"It is clear that our community is very supportive of each other regardless of our differences. Thank you to the visitors who came to support our deaf community and this event as a whole," he said, adding that 6,000 visitors came to see the mural maze at Borneo Convention Centre Kuching since the exhibition began on May 26.

The Malaysia Book of Records certificate was handed over to organising chairman Michael Yii at the exhibition's closing ceremony on Tuesday (June 7).

Snowdan said mural arts were known to create spaces that sparked dialogue around a subject or community issue.

"It captures the local community spirit by enhancing the community’s social consciousness.

"In this context, it expresses Sarawak’s cultural identity," he said.

He said members of the Sarawak Society for the Deaf also contributed to the maze setup and painting.

"We launched this project in an attempt to make history for Sarawak.

"We wanted to communicate our culture, arts and heritage through mural art," he added. 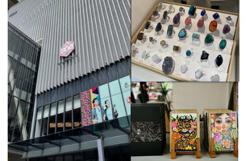