By FARID WAHAB and CY LEE

Braving the rain: A woman, armed with an umbrella, walking in the downpour in Kuala Lumpur. — MUHAMAD SHAHRIL ROSLI/The Star

KUALA LUMPUR: Several areas in the capital city were submerged yet again after a downpour from 11am to 4pm yesterday, a month after a similar episode that saw many major roads submerged.

At around noon, the SMART tunnel management announced the closure of the facility to divert water in anticipation of flash floods.

According to authorities, floodwaters in most areas receded about an hour later, after which the tunnel was reopened to motorists.

Videos that went viral showed Sungai Klang swollen and the confluence of the river with Sungai Gombak in the heart of Kuala Lumpur also dangerously high.

The federal capital has been hit by floods about half a dozen times since Dec 18, when major floods saw thousands of cars submerged and people seeking refuge on rooftops.

Kuala Lumpur City Hall (DBKL) attributed the floods yesterday to clogged drains due to construction and areas being low-lying.

On April 25, heavy rain lasting more than two hours brought traffic to a standstill, and two days later, another round of flash floods hit areas in and around Pudu. 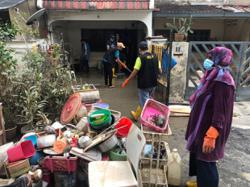