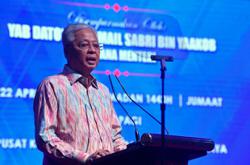 In a post on the official Istana Negara Facebook page, Their Majesties praised Nurul Syasya Nadiah, and the men’s karate team for their achievement in the biennial sporting event.

The country’s 36th gold medal was delivered by the national karate squad through the men's team kumite event line up - S. Prem Kumar, Sureeya Sankar and R. Sharmendran - who beat Indonesia 3-0 in the final.