The 68-year-old witness was being re-examined by lead prosecutor Datuk Seri Gopal Sri Ram in the former premier's trial over the misappropriation of RM2.3bil in 1MDB funds here on Thursday (May 19).

Sri Ram asked why he did not, at that point of time, make a complaint to the Finance Ministry and Najib about his frustrations over what had happened in 1MDB.

Mohd Bakke replied that what discouraged him from doing that was because it would appear like it was a complaint against Najib himself.

"Complaining about the loss of sheep to the wolf!" quipped Sri Ram.

Mohd Bakke: "That was the thing, because from the early part of my involvement as a board member, I was already not comfortable.

"I had this feeling of discomfort, especially when I found out that the management had split the remittance, so that was the trigger. I felt very uncomfortable about the whole thing.

"That prompted me to resign. I wanted to resign on the spot, go back to the PM and tell him what had happened and that I had my suspicions about him. I was not comfortable and that was difficult."

He further said that Najib never asked him why he resigned from the company although he had met Najib on many occasions after leaving.

Sri Ram: "After you resigned, were you satisfied that he (Najib) was aware that you had resigned?"

Mohd Bakke: "Najib never asked me why I resigned. It was business as usual."

Mohd Bakke was the 1MDB chairman from September 2009 until October 19, 2009, when he resigned to protest irregularities in 1MDB's US$1bil deal.

Earlier, when queried by Najib's counsel Wan Aizuddin Wan Mohammed, the witness said he was unaware if the family of former Bank Negara Malaysia governor Tan Sri Zeti Akhtar Aziz had gotten proceeds from the transactions of the sovereign wealth fund.

He said he only became aware of the issue recently through media reports.

Wan Aizuddin asked if he was aware that the Malaysian Anti-Corruption Commission (MACC) had been investigating Zeti, her husband and Tan Sri Nor Mohamed Yakcop under the Anti-Money Laundering Act

At this juncture, Deputy Public Prosecutor Mohamad Mustafa P. Kunyalam stood up and objected to the lawyer's question as it had nothing to do with the witness.

However, judge Datuk Collin Lawrence Sequerah allowed the question as it was a general query.

Najib, 68, is facing four charges of using his position to obtain bribes totalling RM2.3bil from 1MDB and 21 charges of money laundering involving the same amount.

The trial continues on June 7. – Bernama

Witness: Najib asked me to meet ex-PAC chairman to get 'guidelines' before testifying before PAC

It was unusual for Najib to not respond to my SMS, says ex-1MDB chairman 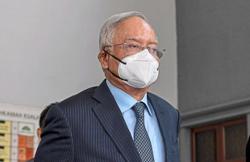