GEORGE TOWN: Search-and-rescue operations are ongoing for a 28-year-old man believed to have fallen from the Penang Bridge at about 11.40am Monday (May 16).

A Fire and Rescue Department spokesman said a report on the incident was lodged at 11.42am before firemen rushed to the scene.

"We arrived at the scene and were informed that a man had fallen off the bridge.

"The victim's car was on the bridge and the engine was still running," said the spokesman.

Several personal belongings and documents were also found in the vehicle. 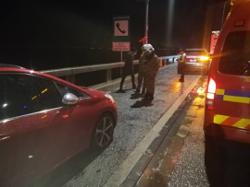