KUALA LUMPUR: No criminal element was found in the alleged harassment and assault case of a news portal reporter by a security guard at a government installation, says the police.

"The aggrieved party can take up the matter to the magistrate should they wish to pursue a civil suit," he said when contacted on Monday (May 16).

"We will issue a form to the complainant to take up the matter to the court," he said.

ALSO READ: Media should be protected as they work for the public good, say media groups

On Saturday, a disagreement between news portal reporters and a security guard at an Urban Transformation Centres (UTC) led to police reports being lodged.

The Vibes tweeted that two of their reporters had been harassed by a security guard at the Pudu UTC, when they were covering a story regarding the long lines for passport renewals.

In the video shown, a security guard can be seen telling both reporters to leave immediately and to stop filming, before shouting in anger. 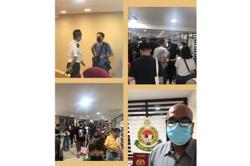