PETALING JAYA: An emergency general meeting (EGM) of the Bar Council will be held on May 27 to discuss the issue over recent allegations of judicial intimidation and interference.

According to Malaysian Bar secretary Anand Raj, the EGM will be held at 3pm on May 27 at Dewan San Choon in Wisma MCA and registration counters will be open from 1.30pm onwards.

The invite to the EGM was distributed in a circular that was posted on Thursday (May 5) on the Malaysian Bar's website.

The agenda of the EGM was to discuss allegations of interference and intimidation against the judiciary, as well as other matters.

Anand said the EGM will also discuss consequences of the failure to abide by Article 125 of the Federal Constitution.

The subsections under Article 125 deals with the appointment and remuneration of judges.

Anand also said that under Section 65(5) of the Lawyer Profession Act (LPA) 1976, any member of the Malaysian Bar can propose any motion to be considered at the EGM by writing to the secretary of Bar Council no less than seven days before the date of the meeting.

"Please submit a soft copy of the motion (in Microsoft Word format) by email to motions@malaysianbar.org.my," the notice read.

Anand also said that the quorum of the EGM shall be 500 members of the Malaysian Bar, and the meeting will be dissolved if the quorum is not reached by 4pm that day.

"Please note that you will be required to produce your MyKad or drivers' licence in order to register your attendance for the EGM," he reminded members.

Anand also reminded Bar Council members that under the Continuing Professional Development (CPD) scheme, those who are in attendance will earn one CPD point for attending the EGM.

"Members are urged to make every effort to attend the EGM so that the issues on the agenda may be effectively discussed by as many members as possible," added Anand.

The protest was meant to defend the institution of the judiciary against alleged intimidation.

In response, Bar Council president Karen Cheah said she was fully aware of the "walk of justice" and that the Malaysian Bar has discussed the matter even before the petition was mooted.

Cheah said she hoped to see all Bar Council members, including previous Malaysian Bar presidents, present during the EGM to present their thoughts on the issue.

MACC's investigations came following reports lodged over claims by rogue blogger Raja Petra Kamaruddin, alleging that there were funds transferred to Nazlan's account during his time as the group general counsel and company secretary of Maybank.

MACC chief commissioner Tan Sri Azam Baki had said the probe was launched due to a report lodged against the matter.

Former M'sian Bar presidents call for a ‘Walk for Justice’ 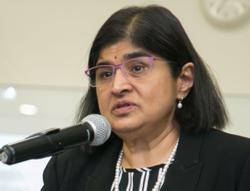