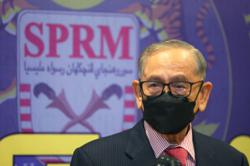 Deep discussion: Abu Zahar (right) chatting with Rais at the handing over of the ACAB’s recommendations in Parliament. — Bernama

PETALING JAYA: The Anti-Corruption Advisory Board (ACAB) to the Special Committee on Corruption (SCC) has recommended the government enact laws that regulate political funding.

“The board recommends that the government enact specific laws to regulate political donations to ensure political activities remain free of corrupt elements, conflict of interest and the exploitation of funds due to illegal activities.”

He said there should also be specific laws to weed out corruption among government servants.

“The enactment of the Misconduct in Public Office Act should be sped up as the board views seriously the misconduct of officers of public bodies which results in deliberate leakage and loss of government funds,” he said when handing over the ACAB’s recommendations in Parliament yesterday.

Abu Zahar said these are among the recommendations contained in a review carried out by the board on the operations and functions of the Malaysian Anti-Corruption Commission (MACC).

He added that the board has also recommended that laws on beneficial ownership be enacted to help combat graft.

The proposed law, he said, would compel commercial entities and individuals to declare their beneficial ownership with regard to a particular matter.

Also recommended is the setting up of a parliamentary special select committee (PSSC) on corruption.

“The board and committee (SCC) are in agreement that matters pertaining to corruption should be placed under the Dewan Rakyat and Dewan Negara through the PSSC,” he said.

He added that this includes the appointment of the MACC chief commissioner, finances of the commission and related matters.

He said an Anti-Corruption Service Commission can be set up to ensure that the MACC is empowered to hire qualified and capable officers.

However, the setting up of such a commission would require amending the Federal Constitution, he noted.

Abu Zahar also said it should be made compulsory for companies to implement the organisational anti-corruption plan in their organisations, which is aimed at combating corruption in a more comprehensive manner involving the community.

Another move proposed is that the SCC should make public the board’s recommendations that will be tabled in Parliament by the Prime Minister.