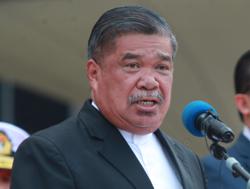 PETALING JAYA: Pakatan Harapan will not work with "traitors who betrayed the trust and mandate of the people" en route to the 15th General Election (GE15), says Mohamad Sabu.

"It must be stressed that the traitors are those who have defected to Bersatu and Perikatan Nasional due to offers made at that time," said the Parti Amanah Negara (Amanah) chief in a statement on Monday (April 18).

Citing an example, Mohamad said Parti Keadilan Rakyat (Keadilan) could not be taken as a traitor just because several MP’s had defected from the party.

He was referring to the defection that took place during the Sheraton Move which saw the collapse of the Pakatan government.

He said it was unreasonable to call parties such as Pejuang, Warisan and Muda traitors, for the "betrayal" committed by Bersatu.

He added that Pakatan’s "big tent" did not include parties that were a part of the current ruling coalition, namely Umno, Parti Pribumi Bersatu Malaysia and PAS.

The "big tent" refers to the cooperation among the Opposition parties for GE15.

Mohamad said a good understanding of the concept of "big tent" was needed before a meaningful discussion could be held.

He added that it was very important for the Opposition to be united as it worked towards fulfilling its responsibilities to the people by working for victory in GE15.

"Towards this end, Amanah will work on increasing its allies to face the same rivals which are Barisan Nasional and PN Perikatan Nasional", he said.

He said the efforts of those who were already determined that a defeat was imminent were not needed.