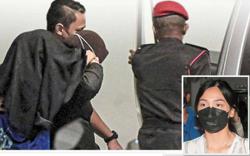 PUTRAJAYA: The Court of Appeal here has granted a RM10,000 bail for Sam Ke Ting who was convicted of reckless driving that resulted in the deaths of eight teenagers in Johor Baru.

A three-man panel chaired by Justice P. Ravinthran also allowed Sam's application for leave to appeal and a stay of execution here on Monday (April 18).

The panel unanimously allowed the applications by Sam after hearing from parties involved.

Other judges on the bench were Justices Lee Heng Cheong and Mohd Nazlan Mohd Ghazali.

Sam, who was brought to the Court of Appeal here on Monday morning from Johor, appeared before the court wearing a blue baju kurung and in handcuffs.

Earlier, Sam's lawyer Muhammad Faizal Mokhtar informed the court that they had filed an application for leave to appeal on Thursday (April 14) with supporting with two affidavits.

ALSO READ: Why have we not learnt any lessons?

The court also heard that the appellant has six questions of law that would be raised in the appeal proper, among which are:

1. Whether the unsworn statement by the accused could be accepted as an explanation to the accused's defence while supported with other testimonies.

2. Whether there is burden of proof on the accused to prove the responsibility to drive carefully compared to a group of cyclists who obstruct the main road.

3. Whether there is burden of proof on the accused to expect unforeseen risk specifically at a hilly and dark road.

On the stay and bail applications, Muhammad Faizal said his client has never skipped a court date and not a flight risk.

Deputy Public Prosecutor Manoj Kurup told the court that the prosecution had no objection to Sam's stay and bail applications.

During the proceedings, the Court of Appeal only allowed the Bar Council, represented by lawyer Ravinder Singh, to be amicus curiae (friend of the court) while disallowing two other similar applications by MCA and the Universiti Malaya Faculty of Law Alumni Association (Parfum).

The court had earlier heard from lawyers Ng Kian Nam, who represented MCA, and Tan Sri Muhammad Shafee Abdullah, who represented Parfum, in their application to appear as amicus curiae before the court.

On April 13, the Johor Bahru High Court sentenced Sam to six years’ jail and a fine of RM6,000 for reckless driving which resulted in the deaths of eight teenagers on Jalan Lingkaran Dalam, Johor Baru, at 3.20am on Feb 18, 2017.

Why have we not learnt any lessons?