Driver of vehicle who sideswiped Lamborghini on NSE nabbed

KULAI: The driver of a white pickup truck which was seen in a viral video colliding into a supercar that was part of a convoy has been arrested by the police here.

Kulai OCPD Supt Tok Beng Yeow said the 28-year-old woman was detained at about 1am on Monday (March 21) at the Kulai police headquarters.

QuickCheck: Did a group of supercars block a highway?

Lamborghini vs pickup truck on the highway

Cops investigating roadblock on NSE after 4WD crashes into Lamborghini 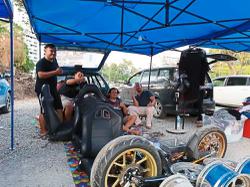