PUTRAJAYA: The Court of Appeal has dismissed an appeal by Health Minister Khairy Jamaluddin in a lawsuit filed by Opposition leader Datuk Seri Anwar Ibrahim relating to a speech the minister made in a political rally 14 years ago.

A three-man panel, chaired by Justice Lee Swee Seng, ruled that there was no appealable error by the learned High Court judge that warrants the appellate court's intervention.

Other judges on the bench were Justices Darryl Goon Siew Chye and Ghazali Cha.

In the unanimous decision, which was read by Justice Goon in a Zoom proceeding on Monday (Feb 7), the case before the court was whether the impugned words were capable of being defamatory or in fact, defamatory.

The panel agreed with the High Court that the impugned words were both capable of being and also in fact, defamatory, as set out in the trial judge's decision.

"As it has been succinctly described, 'words, like people, are judged by the company they keep'," Justice Goon said, referring to the High Court's decision.

"The sting is not so much in the words that are actually used but what ordinary men would infer from them.

"The inference that may be borne from the words used is also to be regarded in law as part of the natural and ordinary meaning used," he added.

Justice Goon said the panel did not find any basis that the trial judge had erred, therefore there was no need for appellate intervention on the issue.

The panel also said that the trial judge did not err in concluding that the appellant had failed to make the defence of qualified privilege.

"We agree that it did not exist, the reciprocity of duty and interest between the appellant and the audience to justify the applicability of the common law defence of qualified privilege.

"As for the quantum of damages ordered, we do not find the award as manifestly excessive and there exists no justification for an appellate intervention," Justice Goon said.

The appeal was dismissed with costs of RM50,000 awarded to the respondent.

On Khairy's appeal to re-amend his statement of defence, the panel was of the view that there were no appealable errors by the trial judge to disallow the appellant's application to re-amend the document.

"Having regard to all the circumstances of the case, it was much too late in the day after the trial had concluded for an amendment of the nature sought to be made," Justice Goon said.

The appeal was dismissed with costs of RM10,000 awarded to the respondent.

Khairy was appealing against a High Court's decision that ordered him to pay RM150,000 in damages to Anwar, in a defamation suit filed by Anwar over Khairy's speech in 2008.

Anwar filed the suit on March 7, 2008, alleging that the latter, as then Umno Youth deputy chief had uttered defamatory words, which included a "main belakang" remark, and caused the posting on websites, including Malaysiakini.com of a video clip entitled “Anwar and kin no threat”.

He said the defamatory words, among others, meant that he was involved in activities contradictory to Islam, was not of good character and was not fit to hold political or other positions.

Khairy appealed the decision but in February 2018, the Court of Appeal struck out his appeal after allowing Anwar's application to annul the notice of appeal on technical grounds.

In December, 2020, the Federal Court ruled in a unanimous decision that Khairy can challenge the High Court's decision and ordered for it to be remitted to the Court of Appeal for it to be heard on its merits. 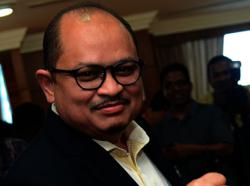