NIBONG TEBAL: The peat fire at the Pulau Burung landfill here has entered its 18th day on Saturday (Jan 29) and firemen are still battling to douse it completely.

Operations were still ongoing at Sector 5 by the Fire and Rescue Department using four fixed monitored water sprays and five plain nozzles from a water supply channelled through pumps.

The fire in Sector 3 was being extinguished using soil to cover it and firemen were also using four fixed monitors and five plain nozzle sprays with water supplied by tankers from Seberang Prai City Council (MBSP).

Penang Environment and Welfare Committee chairman Phee Boon Poh said there was still 31% of the fire remaining in the entire area of 11.3ha and a total of 36 firemen on the scene.

At Ladang Byram nearby, the Air Pollutant Index (API) reading went up to 145 at 10am Saturday, contributed by the nearby landfill fire that first broke out on Jan 12.

The Pulau Burung landfill was declared a level one disaster area based on the National Security Council directive No. 20 after the fire there polluted the surrounding area and posed a risk to health.

Good air quality was between 0 and 50 in the API, while moderate levels are between 51 and 100. 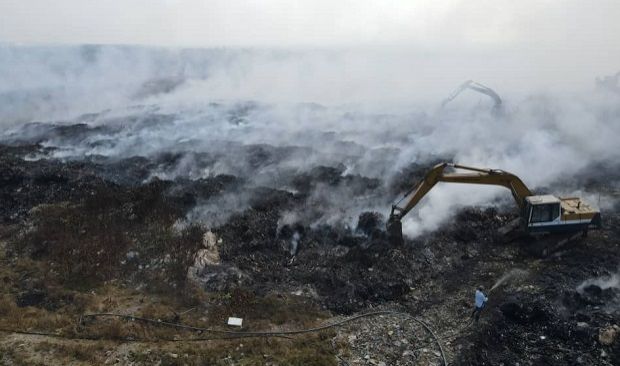