NIBONG TEBAL: It has been 11 days and acrid, white smoke is still billowing out of the Pulau Burung landfill in thick clouds, tearing up the eyes of everyone caught in the direction of where the wind blows.

That is how tedious it gets when a landfill catches fire, said state Fire and Rescue Services Department assistant director (operations) Mohd Hafiz Hafizal Timaradin. Worrying sight: Images by the Penang Department of Environment showing the fire at the Pulau Burung landfill in Nibong Tebal.

“In another landfill fire at Semeling in Sungai Petani last year, where it was 6.47ha, it took us 20 days to put it out. Here at Pulau Burung, the landfill fire is 11.63ha,” he said.

He also said that being near the sea, strong coastal winds fanned the fire, worsening the situation. However, firemen could use a helicopter to scoop seawater and dump it on this landfill fire.

“We have been able to control the fire but it is taking time to cool down,” he said at a press conference held by Chief Minister Chow Kon Yeow yesterday.

Mohd Hafiz added that 2.46ha of the landfill fire had been put out.

“We are now focusing on four other sectors of the fire. Sectors three and five have piles of rubbish, which we have asked to be flattened to make it easier for us to reach the fire.

“It is difficult to gauge how much longer it will take to put out the fire but we are working around the clock, with a team of 50 personnel members from multiple agencies, every shift,” he said.

Mohd Hafiz said compared to the water-bombing method using a helicopter, ground efforts have been fruitful.

“From what we have seen so far, attacking the fire on the ground works better,” he said.

Separately, Chow said the hectarage on the fire since Jan 12 has been reduced to 58%.

Of the 10 schools affected by the smoke and were ordered to close, he said that nine of them have been allowed to resume physical classes tomorrow, except SJK (T) Ladang Byram. 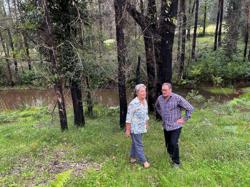