Zahid ordered to enter defence on 47 charges of corruption Justice Collin Lawrence Sequerah ruled on Monday (Jan 24) that the prosecution had proven a prima facie case against the Umno president after a maximum evaluation of the evidence.

"I call upon the accused to enter his defence on all charges," he said in a brief decision.

Earlier, the judge also said the defence's contention that Ahmad Zahid should be given immunity under Section 30(7) of the Malaysian Anti-Corruption Commission Act for truthfully disclosing information about YAB to be of "no merit".

Under Section 30 (7), it is stated that any person who discloses any information to the MACC shall not be prosecuted unless he makes a false or misleading statement.

Justice Sequerah said that the accused has three options in his defence trial, firstly to testify under oath on the witness stand with the prosecution given the opportunity to question the accused during cross-examination, secondly to give an unsworn statement from the dock without being cross-examined by the prosecution, and thirdly to keep silent and not answer to the charges.

He then said: "My Lord, I choose option number 1." 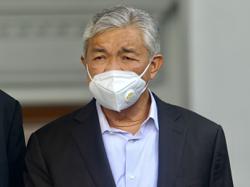