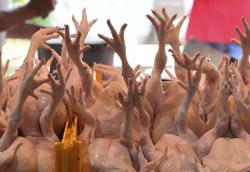 BUKIT KAYU HITAM: The 18th Battalion of the General Operations Force (GOF) foiled an attempt to smuggle in 88kg of ganja worth RM4.4mil in an operation carried out at the Malaysia-Thailand border checkpoint at Jalan Stesen Kereta Api, Padang Besar, Perlis, on Saturday (Jan 22).

GOF Northern Brigade deputy commander, ACP Mohd Noh Khamis, said the drugs were seized at 9.08pm as a result of intelligence carried out in the area.

"Earlier, GOF personnel detected two males in suspicious circumstances milling around the barbed wire fence of the Malaysia-Thailand border, but it could not be ascertained what they were carrying as it was dark.

"About 30 minutes later, we found no movement of people there and GOF personnel then conducted an inspection. They found seven black plastic bags containing 88 blocks of compressed ganja there,” he said in a press conference here today.

He said the drugs were handed over to the Padang Besar district police headquarters for further action, and the case was being investigated according to the Dangerous Drugs Act 1952.

He added that the GOF continues to increase control in the border area, including conducting monitoring using drones, to detect and curb any smuggling activities. - Bernama 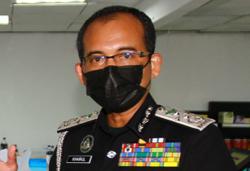