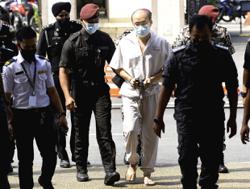 KUALA LUMPUR: No third parties appeared in the High Court here on Monday (Jan 17) to claim more than RM500,000 that was seized by the Malaysian Anti-Corruption Commission (MACC) from businessman Alvin Goh Leong Yeong and the wife of 'Datuk Addy Kana', Alyaa Syuhaila Mohamad Shariff as well as a few of their companies.

The notices of motion to that effect were filed against the relevant respondents by the public prosecutor last Sept 29.

MACC deputy public prosecutor (DPP), Ahmad Akram Gharib assisted by MACC DPP Maziah Mohaide informed the court that the notices for the third parties were gazetted on Jan 13 and were filed in court the next day (Jan 14).

"However, no third parties appeared in court today," he said during case management before Judge Mohamed Zaini Mazlan. - Bernama