KUALA LUMPUR: A repeat offender of the law, who has amassed a total of 16 prior criminal offences, was arrested yet again for robbing a maid at Taman Sri Manja, Petaling Jaya, on Saturday (Jan 15) here.

The local 32-year-old suspect also injured the left wrist of the 50-year-old woman during the attempted robbery.

Petaling Jaya district police chief ACP Mohamad Fakhrudin Abdul Hamid said the suspect threatened the victim with a knife but was unable to rob her of anything as there were many people around during the 12.30pm incident.

“When apprehended, the suspect became aggressive and tried to escape. Police also seized a mobile phone, a motorcycle and two units of closed-circuit television cameras from him,” he said on Sunday (Jan 16).

He said the suspect was remanded for six days from Sunday and the case was being investigated under Section 394 of the Penal Code.

Mohamad Fakhrudin said the police believed several robbery cases in the Petaling Jaya district were solved with the arrest of the suspect, who also tested positive for drugs. – Bernama 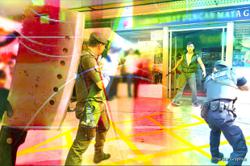