All eyes on apartment on the edge of collapse 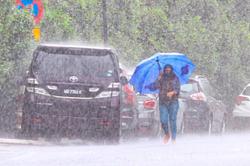 KUALA LUMPUR: The authorities are keeping a close eye on the situation at Seri Duta 1 apartment.

“As of now, contractors are performing works to strengthen the foundation. Monitoring works are conducted by DBKL daily to survey water and land movement.

“Up till now, no land movement has been detected,” he said.

Comm Azmi said the area was deemed unsafe by the Public Works Department.

In a Facebook post on Dec 22, Federal Territories Minister Datuk Seri Shahidan Kassim said all 34 families were evacuated from the area after the landslides.

Photos of the apartment were circulating on social media with Internet users expressing concerns.

According to online portal Majoriti, a total of 34 families were evacuated from the apartment while 62 others voluntarily left before the evacuation was ordered.

Mayor Datuk Seri Mahadi Che Ngah had also visited the location on Dec 21 to identify the best solution to the situation.

Repair works are being conducted by various agencies including city hall.