SEPANG: The flood that hit several areas in Sepang had left some horses "soaking” in flood waters for two days until they were rescued by their owner on Sunday (Dec 19).

A former agriculture technician, Khairudin, who has been operating the stable at Kampung Sri Tanjung, Dengkil, near here, since 2007, said the area had been hit by floods before but not as bad as this time, with the losses amounting to almost RM50,000.

"The flood water level rose gradually until up to 3m on Sunday and nine of our horses could be transferred to a trailer in time while three, including a female foal, were placed in a horse float for temporary protection.

He added that seven of the horses had now been taken to his friend’s stable in Bandar Si Sendayan, Negri Sembilan, and five temporarily placed at a goat pen in Dengkil.

According to him, two of his horses sustained serious injuries to the legs and were being given veterinary treatment while the flood had also destroyed newly-bought horse feed of hay and pellets weighing about one tonne.

"I accept my fate and that the stable has been destroyed. I think the recovery period will be six months,” he said.

The horses at De Dengkil Stable & Arabian Stud Farm have been used for commercial purposes such as advertisements and horse carriage rental for certain events.

"My daughter is also doing therapy on a small scale, using the horses to help autistic children,” said Khairuddin. - Bernama 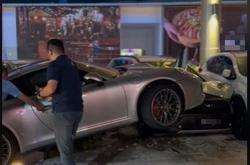