SIBU: There is a need for leadership change in the Bawang Assan constituency to ensure better development, says Gabungan Parti Sarawak (GPS).

Its election director Datuk Amar Douglas Uggah claimed that the former assemblyman of the area for 25 years had failed to deliver.

"Former rep Datuk Sri Wong Soon Koh was a Barisan Nasional representative. But it was not Barisan that failed to deliver; it was him.

"Now he is the leader of a state opposition party Parti Sarawak Bersatu (PSB); can he perform?" he asked.

Uggah said there were some areas in the constituency, which were still without treated water supply.

"We are talking about the need for better infrastructure and amenities as well as income generating socio-economic and modern agriculture activities.

“That is why we have always advised people, especially the rural folk, to support the government.

"The very least, they will benefit from fund allocations under the Rural Transformation Programme (RTP) and Minor Rural Projects," he said.

Uggah was confident that Senator Robert Lau Hui Yew, who was GPS candidate for Bawang Assan, would carry out his responsibilities as expected of him, if the people voted for him in the 12th Sarawak polls.

On GPS’ preparations for the seat, he said they were well prepared for the battle ahead.

"If all plans and strategies are executed well, we can do very well," he said. 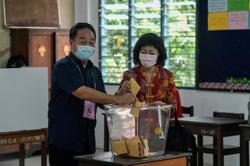