PETALING JAYA: The first case of the Covid-19 variant Omicron has been detected in Malaysia, says Health Minister Khairy Jamaluddin.

Khairy said a positive sample of the Omicron variant was detected on Thursday (Dec 2) involving a 19-year-old South African private university student in Ipoh who arrived from South Africa through Singapore on Nov 19.

He said the student did the RT-PCR test upon arrival at KLIA.

"The student underwent mandatory quarantine at a residence that was provided by the university in Ipoh.

"Throughout the journey from KLIA to Ipoh, a special bus was provided by the university," he told a press conference on Friday (Dec 3).

Khairy added that the student was placed under mandatory solitary quarantine for 10 days and was allowed to leave quarantine on Nov 29.

While in quarantine, Khairy said, the student showed no symptoms and had been fully vaccinated with the Pfizer vaccine on Sept 29.

He said the student's close contacts – five people who were on the bus, including the driver – also underwent Covid-19 testing and mandatory quarantine.

"The first and second testing of all the close contacts came back with a negative result," he said.

However, as the case was detected on Nov 19 before the WHO announcement on the Omicron variant was made on Nov 24, Khairy said those close contacts as well as the student's two housemates and a university employee will undergo an RT-PCR test on Friday.

Khairy added that checks on the MySejahtera application also found that the student complied with the home quarantine and did not leave the venue throughout that period. 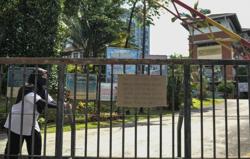