KUALA LUMPUR: The use of personal protective equipment (PPE) and Covid-19 test equipment in managing patients at healthcare facilities and quarantine centres has contributed to an increase in clinical waste generated last year compared to 2019.

“The rise was from the power generation plant and water treatment plant industries, which were categorised as essential services,” he said in a statement yesterday, commenting on the Compendium of Environment Statistics, Malaysia 2021 published by the Statistics Department.

In terms of states, Selangor contributed the highest amount of scheduled waste at 28.5% followed by Johor (16.8%) and Negri Sembilan (16.2%).

“The decline is due to the reduction of activities and less emission of pollutants into the air such as motor vehicle smoke emissions, industrial chimney smoke emissions and open burning activities,” he added.

However, air pollutant substances increased during the recovery movement control order as more businesses were allowed to operate and movement was less restricted.

Based on the results of the monitoring of 144 river basins by the Department of Environment, 104 or 72.2% of river basins were in the clean category compared to 85 recorded in 2019.

Metered water consumption for the domestic sector, however, increased by 5.2% last year due to new norms such as working from home, home-based learning programmes and the movement control order that restricted people to their residences.

“Consumption for the non-domestic sector, however, decreased by 8% in 2020 compared to 2019 as some businesses were closed entirely throughout the first MCO while others were restricted to limited business hours,” he added. 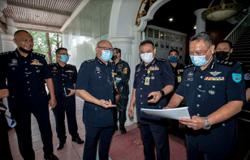