KUALA LUMPUR: The police must investigate if there were deliberate attempts to conceal material evidence related to the 1MDB scandal during the Pakatan Harapan administration, says Datuk Seri Najib Razak.

He added that the investigation should focus on current and former key individuals in the Attorney General’s Chambers (AGC) and the Malaysian Anti-Corruption Commission (MACC) during the Pakatan Harapan administration.

In a media statement which he read outside the Dang Wangi police headquarters, he said that Malaysians were shocked with the MACC statement last week that a balance of RM65mil of funds reportedly linked to Jho Low and 1Malaysia Development Bhd (1MDB) in bank accounts linked to the immediate family of a former Bank Negara Malaysia (BNM) governor was returned to Malaysia by the Singaporean authorities.

“Media reports had said that as much as RM700mil had been transferred to bank accounts linked to the former BNM governor from 2007 until 2013.

“No one can be more disappointed than me as no investigation agency had ever revealed to me of the governor’s family links to Jho Low or their dealings as I had fully trusted her during my time as the prime minister,” he said after lodging a police report on the matter.

The police report called for an investigation to find out if there was any concealment of material evidence regarding money transactions related to his 1MDB and SRC International cases.

While he did not name the former BNM governor, he was referring to the MACC’s statement which revealed that US$15.4mil (RM65.71mil) of 1MDB-linked funds were recently recovered from Singapore and it involved the accounts of a company owned by the husband of former BNM governor Tan Sri Dr Zeti Akhtar Aziz.

The millions linked to the company are part of MACC’s efforts to recover the assets and funds related to 1MDB, which amount to a total of RM20.5bil to date.

Najib said it was even more disappointing that former attorney general Tan Sri Tommy Thomas had said recently that he was aware of such transactions during his time in office.

“I am also disappointed with the reply in Parliament last Monday by the de facto Law Minister Datuk Seri Dr Wan Junaidi Tuanku Jaafar that the police had known about this since at least 2019 under the previous Pakatan Harapan regime, but were still investigating until now – almost the end of 2021.

“I was also made aware that another key prosecution witness in my SRC case had similarly received more than RM85mil of funds directly linked to 1MDB, and again my legal team and I were not told about this despite the individuals playing key roles in the SRC case.

“Therefore, I am making a report to ask the police to investigate if there were deliberate attempts to conceal material evidence from me and all Malaysians by certain current and former key individuals in the AGC and MACC appointed during the Pakatan Harapan administration,” he said in the statement.

To questions from reporters, Najib said he would leave it to his lawyers to decide whether to bring up the new development during his ongoing SRC trial. 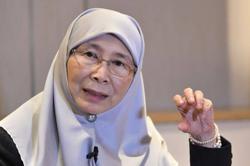