YONG PENG: Flight frequencies to Sarawak have been increased in an effort to reduce the price of air tickets amid the state election and holiday season, says Transport Minister Datuk Seri Dr Wee Ka Siong.

Dr Wee said that the Sarawak Disaster Management Committee (SDMC) and Sarawak Transport Ministry had decided to increase the frequency of flights between Dec 4 this year and Jan 5 next year.

"The Sarawak Disaster Management Committee and Sarawak Transport Ministry had decided to increase the frequency of flights from 223 to 307 flights weekly into Sarawak through Malaysia Airlines, Firefly, AirAsia, Malindo and Scoot (Singapore), starting Dec 4, 2021 to Jan 5, 2022," he said.

"We hope that the state government would expeditiously bring the number back up to 502, as it was before the pandemic impacted air travel," added Dr Wee in a statement posted on his Facebook page on Saturday (Nov 27).

Dr Wee said that the government acknowledges the concerns and feedback raised by the public over exorbitant airfares ahead of the upcoming holiday season this year end and early next year.

"Many travellers have expressed outrage over unusually high air fares to Sarawak.

"This is a matter of serious concern to the government and many discussions have been held to resolve this issue," said Dr Wee.

"This has affected many people, from the travellers themselves to the family members they long to reunite with after much time apart due to the Covid-19 pandemic," he added in a statement on Saturday (Nov 27).

He said that the Transport Ministry has been engaging actively with industry players and state governments, including Sarawak to increase the frequency of flights to all destinations against the backdrop of the ongoing efforts to contain Covid-19 nationwide.

"As I have noted in my statements on Nov 3 and 6, much of the solution comes with removing frequency restrictions on airlines to fly to various states," said Dr Wee.

"In doing so, air fares would then be dictated by market-driven dynamic pricing mechanisms, which take into account supply and demand, economic conditions, fuel costs, and other operational factors among others," he added.

This comes after Sarawakians raised the matter of sky-high airfares in December for flights from the peninsula to the state ahead of the Dec 18 polls and Christmas Day on Dec 25.

They had pointed out that ticket prices were as high as RM1,000 one-way to Kuching or RM2,800 for a Kuala Lumpur-Miri return flight for the weekend of Dec 18.

On the price of airfares, Dr Wee had also added that the Transport Ministry had written to the Sarawak Transport Minister Datuk Lee Kim Shin on Nov 18 to request that the state government return the decisions of regulating air passenger service frequencies to the Malaysian Aviation Commission (Mavcom).

"Although the Transport Ministry fully understands and aligns with Sarawak’s need to contain Covid-19, state governments and their related agencies must do their part to let market supply and demand prevail and fully allow airlines to increase their air passenger service frequencies based on market-driven operational consideration.

"At the same time, all parties are also responsible to strictly comply with the Health Ministry's protocols to reduce the spread of infections everywhere," he said.

He noted that based on a Cabinet decision on Friday (Nov 26), the Transport Ministry has called Malaysia Airlines, AirAsia and Malindo to a meeting.

"The meeting was to stress the need to actively reduce airfares in order to allow more people to enjoy lower air fares during this year end period.

"Immediately following this meeting, Malaysia Airlines has pledged to add additional flights to Sarawak in December, which should result in reduction in fares to the state," he said.

He also reminded all industry players to refrain from hiking air fares to address wide public perception that this is being done by airlines to recoup losses due to the pandemic.

"With this, I urge all parties above to take immediate actions to lower air fares for travellers without the need for the Federal government and its agencies to unduly intervene in the operations of these enterprises," he said. 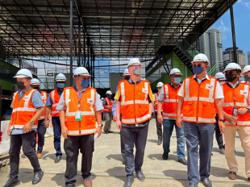