In a statement issued on Friday (Nov 26), Selangor State Secretary Datuk Haris Kasim said the title was revoked because Phang has been declared bankrupt by the Malaysian Insolvency Department.

The title, which carries the title Datin Paduka, was bestowed upon Phang in 2001.

The statement added that Selangor Ruler Sultan Sharafuddin Idris Shah had made the decision after conferring with the Selangor Royal Council.

The revocation took effect on Oct 11 and Phang, who was declared bankrupt early this year, is prohibited from using the Datin Paduka title.

Third parties are also prohibited from addressing and referring to Phang by the title, added Haris.

"His Royal Highness the Selangor Sultan takes seriously the reputation of the state's awards recipients, especially officials involved in any accusations of unhealthy acts lacking integrity such as graft, breach of trust and abuse of power," said Haris.

He added that Sultan Sharafuddin also reminded the relevant authorities to ensure that stringent measures and strict action are in place to prevent graft, breach of trust, abuse of power, practices that lack integrity as well as serious debt problems. 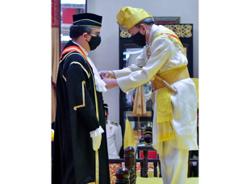