According to the City Fire and Rescue Department, firefighters responded to the emergency call at 5.50pm Tuesday (Nov 23).

“Teams from eight fire stations, totalling 83 officers and firefighters, were deployed along with other assets.

“According to the operations commander there, the shop was 90% burnt. No victims were involved,” it said in a statement.

Efforts to extinguish the fire are still underway.

Earlier, photos and videos of the fire went viral on social media. 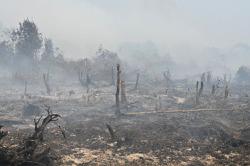