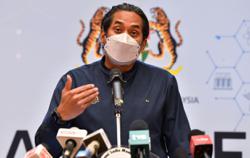 PUTRAJAYA: Increased antimicrobial resistance (AMR) is a worrying threat around the world, including in Malaysia as it can cause incurable diseases and increase the risk of morbidity and death, says Khairy Jamaluddin.

"In addition, it is estimated 700,000 deaths globally each year are linked to antibiotic resistance issues and if uncontrolled, is expected to increase to 10 million by 2050," he said in his speech in conjunction with World Antimicrobial Awareness Week held virtually on Saturday (Nov 20).

Khairy said the existence of over 100 antibiotics, either bactericidal (to kill bacteria) or bacteriostatic (to stop bacterial growth) had helped especially, to speed up the healing process, but the improper and widespread use of antibiotics has created a new problem of antibiotic resistance.

He said AMR occurs when bacteria no longer respond to antibiotics and are ineffective in treating infections.

Khairy said stubborn bacteria could spread through infection from one person to another or through consumption of contaminated food or beverages, exposure to environmental contaminants and eating livestock-based foods containing high antibiotic residues.

"A study on immune response to E. coli conducted by the Health Ministry (MOH) together with various agencies in 2019 found that E. coli bacteria have spread widely among humans, animals and the environment in Malaysia.

"This finding is very worrying and we need to take immediate action," he said.

In conjunction with the "Stop Antibiotic Abuse and Overuse" campaign, Khairy called on every member of the community to play a role in ensuring that antibiotics are used rationally and prudently to reduce AMR incidence.

He said the community should understand that not all diseases are caused by bacterial infections.

"Illnesses such as coughs, colds and sore throats which are caused by virus, do not require antibiotic treatment as they are ineffective and not needed in such cases. Instead, seek appropriate medical care if unwell.

"A doctor's prescription is necessary if you need antibiotics. If prescribed, antibiotics must be taken as directed and the course to be completed accordingly and not be shared with others,” he said.

Meanwhile, Khairy said in an effort to raise global awareness on AMR, this year, the World Health Organisation (WHO) has launched the "Go Blue for AMR" campaign.

"Individuals, communities and organisations are encouraged to join by wearing light blue clothing, or lighting up buildings or monuments with blue lights as a sign of support and solidarity for this campaign.

"On Wednesday (Nov 24), Malaysia will be joining the rest of the world by lighting up the Prime Minister's Office here and the fountain at KLCC with hues of blue as Malaysia's commitment in addressing the AMR threat," he said.

Khairy said awareness on the proper use of antibiotics was important to maintain the health of the community and future generations.

"Let us work together to fight AMR to ensure the effectiveness of antibiotics in the treatment of diseases in our efforts to make Malaysia a healthy and prosperous country.

"At the same time, the public must adopt infection prevention measures by maintaining personal hygiene especially hand hygiene, observing cough etiquette and wearing a face mask when having symptoms besides maintaining food safety and environmental hygiene.

"Avoid public places when feeling unwell and get the recommended vaccinations, such as the Influenza and Covid-19 shots to prevent infection," he said. - Bernama

As we welcome the Year of the Tiger, let’s take a peek into the art of Chinese red paper-cutting
Major push to increase road safety
On upward trend with 5,439 new cases
400,000 children sign up to get vaccinated
New platform to end poverty
‘Umrah SOP to be finalised after other agencies weigh in’
Move to further strengthen statistical system
Cabinet to study alternatives to death penalty
Khairy: Proposal to ban the sale of smoking products to those born after 2005 in the works
Upset eatery owner brandishes two axes at Health Ministry personnel