Chong Wei: I will do my best as tourism envoy to promote Sabah

KOTA KINABALU: Datuk Lee Chong Wei wants to be a genuine tourism ambassador to Sabah with all the knowledge of what the Land Below the Wind can offer visitors at his fingertips.

The former world number one shuttler said just as he focused on badminton when he was active in the sport, he hopes to devote the same attention to the state during his one-year tenure as tourism ambassador.

“This is a new challenge for me. Before this, I was so busy that I did not have the chance to come to Sabah for travel,” he said during an online talk show organised by Sabah Way Forward and moderated by The Star’s Philip Golingai on Thursday (Nov 18) night.

The Penang-born Lee said he does not ever want to answer "I don’t know" when asked about Sabah or people will label him a fake ambassador.

“I must work hard and learn a lot of things about Sabah, and not just put a name (as the ambassador) and do nothing. I want to bring my family to Sabah and I hope the Covid-19 situation will improve so that I can do this,” he said.

While he was happy to be chosen as the tourism ambassador, he hopes Sabahans would not continue being unhappy about it, because Sabah is part of Malaysia and "We are all Malaysians".

Lee’s appointment drew mixed reactions from many Sabahans, some for the appointment and some against it.

The father of two expressed his appreciation to the state government for its confidence in him and promised to do his best to spread news and information about Sabah to his social media followers, family and friends.

Throughout the talk show, he repeatedly expressed his hope to do well as ambassador and to bring in as many tourists as possible to the state even with the Covid-19 pandemic still raging globally.

He also took up the challenge to scale Mount Kinabalu and try local food like butod (sago worms), bosou (fermented fish or pork and rice), tuhau (wild ginger) and bambangan (a mango-like fruit) when he visits Sabah again.

Sabah Tourism Board (STB) chief executive officer Noredah Othman said having Lee as ambassador is not a question of him riding on Sabah’s popularity but rather Sabah riding on his fame.

She said STB planned to bring Lee to visit Mount Kinabalu, dive sites in Semporna, islands around the state, Danum Valley (known also as "the Lost World of Borneo") and other parts of Sabah. 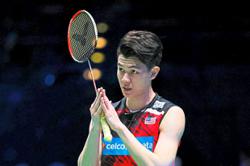