A night to remember for SMG

By ASHLEY TANG and TARRENCE TAN 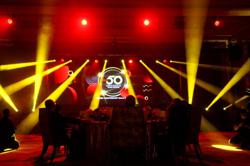 KUALA LUMPUR: The year-long 50th anniversary celebrations of Star Media Group (SMG) capped off on a grand note with music, cheers and good wishes from VIP guests at a gala dinner.

The black-tie event was held in appreciation for SMG’s long-standing business partners and stakeholders.

A cocktail reception was held for the attendees, who could also commemorate the night by having their photographs taken at a specially designed photo wall.

The gala dinner at Shangri-La Kuala Lumpur started with a holographic dance performance that was specially choreographed to tell the story of SMG being the voice for the people.

A video presentation of The Star’s progress throughout the years was also screened to guests.

There was much revelry at the event, hosted by Terrence Dass and Julie Woon, with performances by the Frankie Sixes Band, among others.

They played jazz tunes of popular songs such as The Way You Look Tonight, Jelingan Manja, Can’t Buy Me Love, Moondance, Getaran Jiwa, All Of Me and Fly Me To The Moon.

Guests were also entertained to performances by SMG’s 988 and Suria FM radio presenters.

988 personalities Chan Fong, Chloe, Cynthia, Brandon, Joycelyn, Cassey and Chrystina serenaded the guests with a song titled A Million Dreams while Suria FM announcers Fizi, Ajak and Suraya, among others, gave the audience an enjoyable night by belting out songs such as Jon Bon Jovi’s It’s My Life.

Songstress Misha Omar mesmerised the guests with a medley of tunes – Bunga-Bunga Cinta and Pulangan and her rendition of Adele’s Someone Like You.

The night also marked the launch of Star Foundation’s Star Social Impact Grant that is aimed at partnering with social organisations to carry out impact-driven projects to better the lives of local communities and the environment.

The night ended with a cake cutting ceremony.

Among the well-wishers was Secret Recipe Group business development director Patrick Sim who congratulated SMG for its golden jubilee milestone.

“This is a great achievement and I wish them another 50 years of great success.

“The Star is a paper I grew up reading and it brings back many memories,” he said.

Sogo Group Malaysia group executive Andrew Lim said they had been strong supporters of SMG since the very beginning.

“We started advertising with The Star 50 years ago and we will continue to support them in the years to come,” he said.

Door gifts of a customised large canvas bag with a box of A3 sized “Star50, Then & Now” jigsaw puzzle was given to the attendees.

‘The Star’s success is built upon firm ties with stakeholders’ 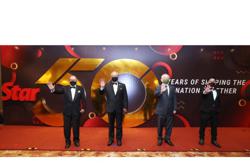