PAC chairman Wong Kah Woh said the proceedings on the project would be held on Nov 10 and 18.

"We will call them to give an explanation to the PAC first before deciding on calling other witnesses,” he told a press conference at the Parliament building on Thursday (Oct 28).

The Auditor-General’s Report (LKAN) 2019 Series 2 tabled in the Dewan Rakyat recently revealed that the uCustoms system of the Royal Malaysian Customs Department to replace the Customs Information System failed to be completed within 86 months after being given five extensions of time (EOT).

According to the report, a total of RM272.99mil had been paid to the suppliers and Project Management Office, while only one Liquidated Ascertained Damage (LAD) amounting to RM55,660 was imposed.

Wong said the PAC was also expected to hold proceedings on the issue of irregular payments involving the government’s Integrated Trunk Radio Network Project amounting to RM499.18mil in December.

The LKAN Year 2020, which was released today, found that the claim payment for the maintenance cost of the project has been paid without the validation of the Key Performance Indicator (KPI) report. - Bernama 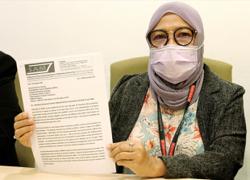