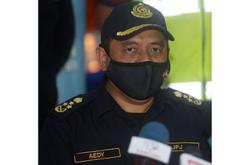 KUALA LUMPUR (Bernama): An undocumented Indonesian man was detained while he was trying to evade arrest during an integrated operation at the Jalan Duta Toll Plaza here on Friday (Oct 22) night.

In the 9.30 pm incident, the 30-year-old man was riding a motorcycle with his wife as the pillion rider but fled on foot after being asked to produce his motorcycle licence and identification documents.

However, he said the suspect only managed to run for 200m before being arrested by enforcement personnel.

"Further checks found that the suspect and his wife are from Surabaya, Indonesia and both of them did not have valid documents and were on their way to Segambut from Shah Alam,” he told a press conference here.

Meanwhile, Aedy Fadly said a total of 318 compound notices were issued in the operation that was held from 8pm to midnight.

"Of the total, 158 had to do with Motor Vehicle Licenses, registration number plates (73), tinted car screens (66), technical offences (9), using the high intensity discharged light (7) and no side mirrors (5),” he said.

The integrated operation was also conducted to ensure compliance with the standard operating procedure (SOP) of the National Recovery Plan.

Also involved in the operation were personnel from the Royal Malaysian Police, the Immigration Department, the National Anti-Drug Agency and the Environment Department. - Bernama