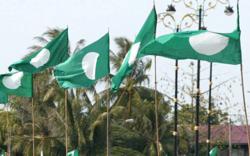 In a Facebook post, the PAS president said despite whatever reason given for the use of branding following the Timah whisky controversy, the use of the name "Timah" in Malay refers to Fatimah Az-Zahra, which is the name of Prophet Muhammad's daughter.

"And this subtly can be seen as touching the sensitivity among Muslims," he said on Friday (Oct 22).

While many in PAS had called for action to be taken against the manufacturer, Tuan Ibrahim said “Timah” was neither a Muslim name nor a person’s name.

“It’s a type of metal. Furthermore, the logo is a picture of a man. There is no man named Timah,” he was quoted as saying by PAS mouthpiece Harakah Daily.

Timah’s manufacturer explained that the name is derived from the Malay word “tin” and the man pictured on its bottle is Captain Tristam Speedy, an English officer in Malaya during the British colonial era.

Meanwhile, Abdul Hadi, who is also Marang MP, said that as a multi-religious society, religious authorities cannot prevent the use or sale of alcohol by non-Muslims due to the concept of religious freedom.

He added that the PAS-led Kelantan and Terengganu state governments have set under their jurisdiction a ban on alcohol only for Muslims.

"At the same time, they do not prohibit the sale of alcohol among non-Muslims," said Abdul Hadi.