MELAKA: Umno and the other component parties in Barisan Nasional have yet to reach a consensus on working with other political coalitions in the state polls.

Umno president Datuk Seri Dr Ahmad Zahid Hamidi said there was no conclusion made on the official stance of alliances.

“Our focus is winning the election for now,” said Ahmad Zahid, who is also the Barisan chairman, after a meeting with the Melaka Umno election machinery at Masjid Tanah near here yesterday.

Ahmad Zahid said the fielding of Umno candidates for the state election would be according to the party’s constitution, which would see the list of election aspirants discussed at division level before being submitted to the party leadership.

“We will evaluate each of the candidates based on their capabilities and abilities,” he said.

Ahmad Zahid said the selection of each candidate would also depend on data obtained from previous general elections.

He also revealed that the party would be focusing on all the state seats it was contesting and not only the three hot seats, namely, Sungai Udang, Pantai Kundor and Pengkalan Batu. 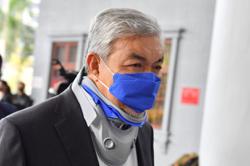