GEORGE TOWN: A man on the police wanted list has been arrested after a 20-minute high-speed chase through several streets here.

The suspect, 26, was eventually arrested after he lost control of his car due to a punctured tyre in Jalan Jelutong.

A police mobile patrol vehicle had earlier signalled the man to pull over for an inspection after he was spotted behaving suspiciously while driving along Tun Dr Lim Chong Eu at 1.15am on Friday (Oct 15).

He sped off instead of pulling over, resulting in a chase that also saw six other police MPVs in hot pursuit.

He said the suspect, from Ayer Itam, had a record of 11 prior criminal offences, eight of them drug-related.

"He is wanted for a criminal case (and also) tested positive for methamphetamine.

"We have remanded him for five days until Oct 19 to facilitate investigations," ACP Soffian said in a statement.

He said the case was being investigated under Section 186 of the Penal Code for obstructing public servants in discharging their duties.

He added that the man was also being investigated for drug possession under Section 39(A)(2) of the Dangerous Drugs Act 1952 and having administered methamphetamine into his body under Section 15(1)(a) of the same Act. 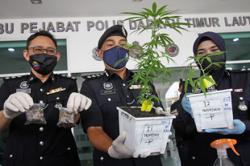