PETALING JAYA: The government has been asked to explain the reason why laptops and devices allocated for B40 students under the Cerdik programme have yet to be distributed in certain constituencies.

Chan Foong Hin (PH-Kota Kinabalu) claimed that the distribution of the devices to enable digital education access under the initiative had been delayed.

"I was informed that in my parliamentary constituency alone, a total of 262 laptops and devices were supposed to be distributed at two schools in Kota Kinabalu.

"It is now October, but the 262 devices and laptops still have a 'to be distributed' status," he told a press conference in Parliament Monday (Oct 11).

The Cerdik programme aims to provide digital access to education by helping students from B40 families adapt to online lessons, e-learning and outside-the-classroom teaching during the Covid-19 pandemic.

He also claimed that other constituencies such as Kota Melaka, Seputeh, Bukit Bendera, Cheras and Bukit Bintang are experiencing the same issues.

"I urge the government to give an explanation over the distribution and the criteria to receive the devices," he said.

Khoo Poay Tiong (PH-Kota Melaka) also said that none of the B40 students in his constituency had received any of the devices under the initiative. 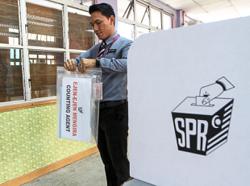