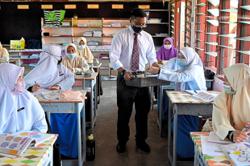 KUALA LUMPUR (Bernama): Educational institutions under the Ministry of Education (MOE) in Selangor, Melaka, Kuala Lumpur and Putrajaya will still reopen on Oct 4 based on the operations stipulated for states in Phase Two under the National Recovery Plan (NRP).

The MOE said in a statement on Thursday (Sept 30) that if a state transitions to the next phase, the operations of educational institutions under the MOE according to the new phase will only be implemented two weeks after the date of transition.

"As such, the operations of educational institutions in these states (Selangor, Melaka, Kuala Lumpur and Putrajaya) according to stipulations under Phase Three of the NRP will be from Oct 18.

"This involves an increase in the enrolment of other students including preschool students, public examination classes in full boarding schools/day schools/private schools, International Baccalaureate Diploma (IBD), Malaysian Sports School Pre-University as well as other international examination classes,” added the statement.

Educational institutions under the MOE in Kedah will still reopen on Oct 10 for Form Six Second Semester classes and international examination classes (IGCSE O-Level) while the operations stipulated for Phase Two of the PPN, including for vocational colleges, will only be from Oct 17.

The MOE said the reopening of educational institutions in the South Zone of Sarawak would still be on Oct 4, based on the operations stipulated for states in Phase Two under the PPN.

This is following the announcement by the Sarawak State Disaster Management Committee regarding the transition of the Southern Zone of Sarawak to Phase Three under the PPN effective from Oct 1, but the operations stipulated for Phase Three of the NRP will only begin on Oct 18.

However, the MOE said that all educational institutions under its jurisdiction that are in enhanced movement control order (MCO) areas will be closed throughout the enforcement period.

As such, all students in the affected areas will be required to follow the home teaching and learning (PdPR) method, it said.- Bernama
Article type: metered
User Type: anonymous web
User Status:
Campaign ID: 46
Cxense type: free
User access status: 3
Join our Telegram channel to get our Evening Alerts and breaking news highlights