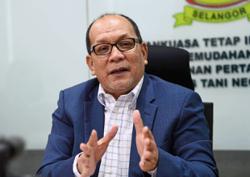 The Selangor Mentri Besar in a statement said it would take about one to three months for slope strengthening and stabilisation works to be completed.

“The works, including the construction of permanent retaining walls, are estimated to cost RM6mil.

“The Gombak district officer, as the chairman of the Gombak disaster committee, will discuss with the affected owners of the bungalow lots to figure out the cost for these works,” he said in a statement Thursday (Sept 30).

He, however, did not indicate if the cause of the landslide had been determined.

“The Selangor Drainage and Irrigation Department (JPS) will carry out fortification of the Sungai Kemensah river bank by installing sheet piles along a 200m stretch at a cost of RM1mil.

“Immediate action to restore water flow of Sungai Kemensah and other related works was completed on Sept 19, at a cost of RM20,000,” he said, adding that canvas sheets had been installed over the collapsed slope in the interim.

Amirudin said the state Geoscience and Mineral Department had determined that ground movement was still active as of Wednesday (Sept 29).

“Monitoring works will continue until no more soil movement is detected.”

On Sept 17, a major landslide affected three bungalows and 19 townhouses and 28 families.

A total of 103 residents were evacuated.