Bukit Aman will step up its Covid-19 standard operating procedure compliance checks as the country moves towards the endemic phase.

“Inspections by the compliance task force will be stepped up to ensure everyone abides by the SOP,” said Bukit Aman Internal Security and Public Order Department director Comm Datuk Hazani Ghazali.

“The top three SOP violations are not wearing face masks, lack of physical distancing, and not registering details on the MySejahtera app before entering premises.

“Other offences such as activities at entertainment outlets are not that common,” he said.

Comm Hazani hopes the public will comply with the SOP already in place or any new one to be issued by the National Security Council.

“Our ultimate goal is to break the chain of infections,” he added.

Home Minister Datuk Seri Hamzah Zainudin had revealed that under Ops Patuh, about 1.8 million inspections were conducted nationwide from June 25 to Sept 23.

Some 7,410 compounds were issued and 4,440 premises ordered closed.

“We have about 700 teams conducting checks around the state daily,” he said.

On the expected relaxation of the SOP, Comm Arjunaidi said the police would act in line with the government’s decision.

“We have to wait and see what will be introduced – however, compliance checks will still be conducted,” he said.

“We are now monitoring the level of compliance among the public.

“We are aware that the government is expected to introduce some relaxation to the SOP, but we discovered that some people are already relaxed (when it comes to complying with the SOP),” he said.

“We will gauge the level of compliance of the people in Kuala Lumpur. If need be, we will also increase the number of compliance teams,” he added.

“During the early stages of the pandemic, we advised the public to be more sensitive to the latest SOP.

“Now we will not hesitate to take stern action against any offender to contain the spread of the virus,” he said yesterday.

Comm Shuhaily added that the main top five offences committed by the public included not wearing a face mask in public areas, gathering in groups, interstate travel without permission, not checking in with the MySejahtera app at business premises, and having too many people in a vehicle.

Seberang Prai City Council (MBSP) mayor Datuk Rozali Mohamud said the council will still be strict with regard to full compliance with the SOP in each sector as the country moves into the endemic phase.

“MBSP issued a total of 103 compounds for SOP breaches as at Sept 27 after the local council was given the authority to issue compounds from April 14.

“Most of the compounds were for failure to check in via the MySejahtera app at premises, not using a face mask at public areas, and not observing physical distancing.

“We have also issued compounds to owners of premises who failed to provide the MySejahtera QR code or a registration book for customers,” he added.

Consumers Association of Penang education officer NV Subbarow said that as the country moves towards the next phase, the authorities should take stricter action against those who flout the SOP.

“We have been fighting Covid-19 for almost two years already and people are familiar with the SOP. There are no excuses anymore that they are unaware or unsure of the SOP.

“Offenders should be slapped with compounds on the spot. If they do it again, we must impose a heavier penalty.

“People have had ample time and we have educated them again and again. It is time to take a serious approach as a warning to the offenders as well as to others.

“When a person does not adhere to the SOP, they are actually also putting other people’s lives at risk,” he added. 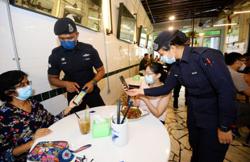