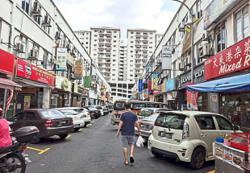 The Deputy Chief Minister said the objectives of the committee chaired by him is to come up with solutions to the flash floods in Kota Kinabalu as well as other districts.

This will be done via monitoring, enforcement and short and long-term actions to solve the perennial disaster.

“The committee will also coordinate actions among related agencies based on their powers, so that an integrated approach can be taken,” he said, adding that he had chaired the first meeting of the committee here on Friday (Sept 24).

Among other committee members are representatives from the Drainage and Irrigation Department, Public Works Department, Local Government and Housing Ministry and Kota Kinabalu City Hall.

“The involvement of various agencies under this steering committee is crucial as the issue of flash floods is not a silo problem," said Bung Moktar.

“There are also various attributing factors besides the weather, which need coordinated and smart actions,” he added in a statement on Saturday (Sept 25).

He said that the committee is also expected to go to the ground to study and identify the causes behind flash floods and are also expected to come up with cost estimates for deepening the river or expanding drainage, for example.

He noted that future development planning requires having a policy and an action plan focused at reducing flooding risks.

On another matter, the state Public Works Minister denied making confusing statements about the termination of the project delivery partner (PDP) in Sabah Pan Borneo Highway project as claimed by several Pakatan Harapan Members of Parliament.

He claimed that the Pakatan and Warisan Plus state government that were in administration during the PDP termination had committed a mistake since they did not secure sukuk financing or bonds first.

“Whereas the Sarawak government which also ended their PDP service for the highway project there only did so after securing sukuk financing. Thus, the Pan Borneo Highway project in Sarawak went on smoothly without delays,” he said.

He said at present, the Sabah leg could only depend on development allocation of RM1bil annually from the Federal Government, to execute the packages under the highway project which costs billions in total.

If the project in Sabah depended solely on this funding, it would take many years for it to be completed.

In the state legislative assembly on Thursday (Sept 23), Bung Moktar stated that the government was looking at private finance initiatives (PFIs) to continue with the highway project.