IPOH: A nanny has been arrested for the attempted murder of a seven-month-old boy in Taman Desa Pelancongan in Lahat near here.

Perak police chief Comm Datuk Mior Faridalathrash Wahid said the 22-year-old woman is believed to have slammed the infant's head against the floor twice at 2.35pm on Wednesday (Sept 22).

"Based on initial information, the nanny did this because the baby would not stop crying.

"She only stopped after the baby lost consciousness," he said in a statement on Friday (Sept 24).

"She contacted the father, told him that the baby had fallen from a walker, and asked him to take the boy back.

"The father found a bump on the baby's head and asked the nanny how it happened. The woman then said the baby fell while being carried," he added.

"The baby was sent to the Raja Permaisuri Bainun Hospital for checks and was found to have internal bleeding and cracks on his skull," he said.

"The baby is unconscious and in critical condition," he added.

He said the father lodged a police report at about 3am on Thursday (Sept 23).

"We are investigating under Section 307 of the Penal Code for attempted murder," he said. 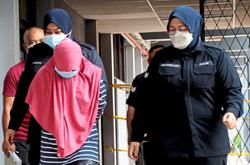