The victim' remains being taken to the fishermen's jetty at Kuala Lukut after it was found floating in waters off Lukut.

PORT DICKSON: Search and rescue teams have found the body of a 61-year-old man who is believed to have fallen off his boat while fishing at sea.

The Malaysian Maritime Enforcement Agency (MMEA) in a statement said the fisherman, who was reported missing on Wednesday evening (Sept 22), was found drowned around 7.30am Thursday (Sept 23).

"Local fishermen found a body floating at sea early today and it is believed that it was the victim who was reported missing yesterday.

"The remains were brought to the Kuala Lukut fisherman's jetty later and was positively identified by the victim's family members," he said, adding that the body was then sent to the Port Dickson Hospital for postmortem.

Haris Fadzillah said the MMEA had received a report that the victim had gone out fishing alone early yesterday but failed to return.

Lukut around 10am which was believed to have been used by him.

The MMEA launched a search and rescue operation around 4.30pm assisted by personnel from the Fire and Rescue Department, police, Civil Defence Force and local fishermen. 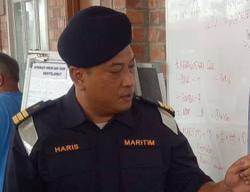