He said this is due to requests from party members wanting him to contest the positions in the next Umno polls.

According to Utusan Malaysia, Tajuddin said the Umno members were confident of his ability to bring changes and provide a good level of service.

“I offer myself for the top three positions. There are some members who want to see me serve the party. Some also say that if I run for vice-president, God willing, I can win," said Tajuddin.

"There are those who said that I should run to be the deputy president. So whether it is the president, vice-president or deputy president, the position is not what I am striving for. It is service to the party and the people,” he said.

The former Umno election director said he supported calls for the party's polls to be expedited to reunite it to face the 15th General Election.

Tajuddin also added any division in the party should be resolved immediately.

"At the moment, the party is not uniform; there is no action plan, no discussion strategy. There is also no discussion among the top, state or division leadership, and no discussion on what needs to be done to strengthen the party machinery," he said. 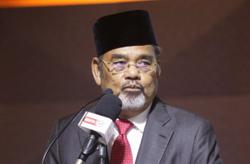