JOHOR BARU: Only 1.8% of the adult population in Malaysia have yet to complete their vaccination before the country achieves its target of 80% adult population vaccinated under the national immunisation programme.

"A total of 93.1% of adults have got at least one dose of the vaccine.

"Including all other groups, 56% of the total Malaysian population has been fully vaccinated, while 67.2% have received at least one dose," he said.

He said this during his working visit to the OKU Sentral drive-through vaccination centre (PPV) at the Johor Bahru City Council Aquatic Centre in Larkin here on Sunday (Sept 19).

"Our focus right now is for the states to reach at least 60% of their adult population to be fully vaccinated by the end of September this year," he said.

Dr Adham added that the vaccination coverage in most states throughout the country was currently on track, especially in Sarawak, Labuan and the Klang Valley which included Selangor, Kuala Lumpur and Putrajaya.

"Thus, we can see a declining trend of vaccination rate in the country at this time. The rate was previously high as most of the vaccination focus is on the Klang Valley which has a high daily capacity compared to other states.

"However, the decline in daily vaccination rate does not imply that vaccination efforts are being decreased; rather, they are being concentrated on certain states and locations, including dropout groups" he added. 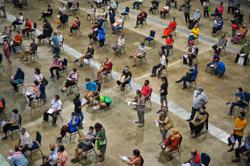