DATUK Seri Anwar Ibrahim’s role as Opposition Leader received an immediate boost following the signing of the memorandum of understanding (MOU) for bipartisan cooperation towards stability and Parliament reforms.

One of the clauses in the MOU states that the role of the PKR president and Port Dickson MP is enhanced with immediate effect.

This ensures that the Dewan Rakyat Opposition leader is given the appropriate rights and facilities to be able to discharge his responsibilities effectively and comprehensively, reads the clause.

Also effective immediately is the equal allocation of funds for government MPs as well as opposition lawmakers under the MOU.

On Monday, the government and opposition leaders signed a historic MOU in Parliament, which paved the way for a bipartisan and consensual approach in bringing stability and reform for the nation.

The MOU covers six areas - empowering the Covid-19 plan, administrative transformation, rejuvenation of Parliament, independence of judicial institutions, issues involving the Malaysia Agreement 1963 (MA63) and the setting up of a steering committee.

The restructuring of Parliament’s Special Select Committee and increasing of committee numbers should the need arise, would also be implemented immediately.

Representation of government and opposition lawmakers in the committees will be equal to reflect their respective parties in the House. This includes providing the necessary supporting staff and allowances.

It was also agreed in the MOU that Datuk Seri Ismail Sabri Yaakob will remain as Prime Minister as long as the MOU is in effect until the Dewan Rakyat is dissolved and that Parliament will not be suspended until July 31, 2022.

Other parliamentary reforms include the tabling of a Bill for Parliament Services Act by the second meeting of Dewan Rakyat next year.

The Parliamentary Services Act was enacted in 1963 after the formation of Malaysia but was later repealed in 1992.

The steering committee will continue to operate for as long as the MOU is in effect; it is to meet at least once or twice a week.

Also contained in the MOU are plans to table the anti-party hopping bill and law to limit the term of the prime minister to 10 years.

On Undi18, the government has agreed to get the Election Commission to expedite its implementation.

These legislative reforms are targetted for implementation by the end of the fifth parliamentary session next year.

In the MOU, the government said it would inject an additional RM45bil into the Covid-19 fund, bringing the total amount to RM110bil.

It is also agreed that RM10bil in cash aid is to be provided to the lower half of the 40% of households under the B40 group, hardcore poor and urban poor; 40% in the mid-range of the M40 group and those who have lost their income.

Also stated is an automatic bank loan moratorium on interest payments for three months beginning October for some 50% of those in the lower groups income.

On the National Recovery Council, both sides agree that it should comprise 50% experts from the public and private sectors and 25% each from the Opposition and government. 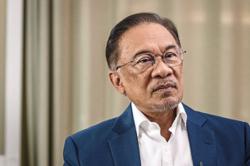