PUTRAJAYA: About 100,000 illegal immigrants have returned to their respective homelands under the repatriation recalibration programme initiative so far.

Home Minister Datuk Seri Hamzah Zainudin (pic) said that as of Monday (Aug 30), 101,851 had been repatriated out of 122,270 individuals who signed up for the programme.

Revenue collected from this initiative totalled RM59,171,400 so far, he added.

He said the labour recalibration programme, meanwhile, saw 178,743 illegal immigrants registered for employment involving 8,544 employers who have paid a total deposit of RM87.59mil.

Hamzah, who resumed his post as Home Minister following a recent Cabinet appointment, said policies under the ministry’s five year-strategic plan and the 12th Malaysia Plan will proceed as planned.

“This includes amendments to be made to several laws and Acts such as the Drugs and Substance Act, as well as the Anti-Trafficking in Persons and Anti-Smuggling of Migrants Act,” he said.

The minister also said border control will remain a focus where improvements will be made through procurement of strategic assets to be used at the northern borders of Kedah and Kelantan, as well as in Sabah and Sarawak.

Hamzah: MM2H participants must be of quality and contribute to economy 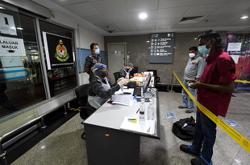